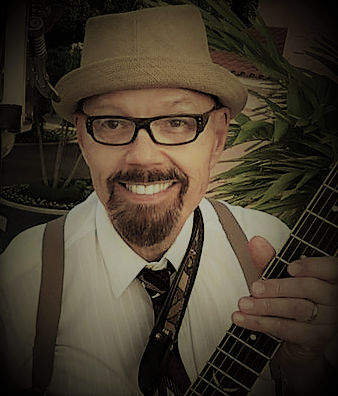 Lucian "Luke" Williams began his musical career in the Northeast, growing up in New Britain, CT.  After studying arranging at Berklee College of Music in Boston, he taught guitar at the Hartford Conservatory and performed with bands in the New England area.  He was the musical director for the Neighborhood Arts Program in New Britain, directing the orchestra and smaller ensembles.  During this time he also took private lessons from guitarists Mick Goodrick, Chuck Wayne, and George Benson.  He began his serious vocal training at the Hartford Conservatory under Jacqueline Jarrett and David Baker.
Luke then relocated to New York City.  During his ten year residence there, he worked a steady jazz trio gig at Rascals on the upper east side of Manhattan and continued his vocal studies with noted operatic tenor, Carmine Gagliardi.  He also established the jump swing band, Lew Willie & the Snapdragons which performed at such well known venues as the Ritz, Tramps, the Bitter End, Kenny's Castaways, Folk City, and the Lone Star Cafe.
He has worked extensively on Cape Cod Massachusetts with the band, Mass-Conn Fusion, in Chicago with the Stanley Paul Orchestra and currently tours as lead guitarist with '60's legends, Jay & the Americans.
Since moving to Florida, Luke has worked as a full time musician, arranger, orchestra leader, vocalist, educator, and instrumentalist (guitar, piano, electric bass) - working as a sideman for several prominent society bands and holding a steady engagement as solo pianist at the Key Biscayne Yacht Club.  He was the guitarist for the Miami Heat Band, a trio that played all the Miami Heat basketball games at the old Miami Arena, directed the Gold Coast Jazz Society Orchestra, and worked as a musical arranger for Norwegian Cruise Lines.
He reformed Lew Willie & the Snapdragons which has been a featured act for many private and civic events and also teamed up with bassist Rusty Heck and drummer Ronnie Brooks to form the rock trio, Actual 3.
Luke is capable of performing, as a solo entertainer, an unusually wide ranging repertoire because of his versatility on guitar, piano, and vocals.  An accomplished arranger with a vast library of charts, he can lead a ten piece orchestra as competently as a trio or quartet.